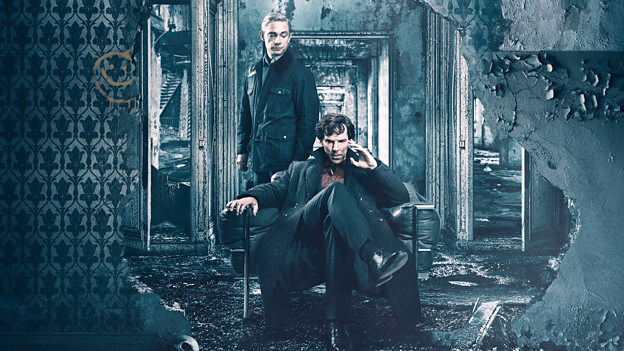 The other week we had STM Sherlocks in complete panic.

The sense of mystery was in the air.

Let me re-slap this quote here as a reminder:

“How often have I said that when you have excluded the impossible whatever remains, however improbable, must be the truth.” - Sherlock Holmes

If you remember, a hubby & a wifey launched a sweet, sweet product.

They did everything 100% right with a textbook approach.

There was no reason for those camps not to scale to the moon.

Angles, targeting, creatives, budgets, bids, the product itself, raving reviews, all spot on.

And then it all suddenly died.

CTRs dropped in half and so did conversions.

Mind you this guy has managed well over 7 figures in ad spend knows his ways around the treacherous fields of media buying.

Queue a desperate cry for help.

What do you think happened?

We picked and we poked.

I mean even a neurosurgeon isn’t so meticulous with his research and even during surgery.

Then we came to the conclusion it was down to one very confused FB algo.

Ok but why? Why when all the signs were bright green?

At first we thought it was something to do with the audiences.

The stats proved us wrong.

Then we thought the bids and budgets may be the culprit.

Enter bidding suggestions and a possibility of the great bidding wars.

Turns out this product doesn’t even have any competition on FB.

It wasn’t the audiences or bids or the budgets or the competition.

It wasn’t the LLAs.

We went as far as to suggest changing the entire marketing strategy to ebooks, funnels, tripwire offers, emails and so on and so forth.

But our very last unanimous suggestion was to test more angles and creatives.

To unplug that clogged up algo.

That worked out in the end but it wasn’t just the creatives that turned things around.

There’s one other big lesson to be learned from this whole mystery.

The other missing piece of the puzzle is FB’s weirdness when it comes to the end of quarters.

The algos try to readjust themselves after rising CPMs and CPAs.

They scramble as much as advertisers do.

Hence why they wouldn’t start off immediately even under perfect conditions.

Now back to the creatives – the absolutely main key point is that the ads need to have engagement and comments coupled with a good angle.

One sneaky change to the creative approach and you can see the camps blasting off into space.

That, coupled with the start of the next quarter and things blasted off faster than even Elon Musk’s rockets.

All those advanced targeting spells and incantations will do you no good unless you know how to market to your people. Period.

Of course, this long email does the entire thread no justice at all.

Everything I described has been torn apart in excruciating detail in the thread.

The OP has done an incredible job of providing super long, detailed replies with stats and screenshots.

They’re currently bringing in $2k+ a day and they sold out so fast they’re waiting for the next large shipment right now.

He’s got time to prepare all the other sweet stuff like emails, SEO and other promotion channels and start outsourcing and hiring employees.

We shall wait patiently for his next update.

This is probably one of the most motivating threads we’ve had in quite a while and it’s full of golden nuggets.

Even Loki Would Turn Into a Good Guy For Stable 7 Figures a Month Don’t Ya Think? 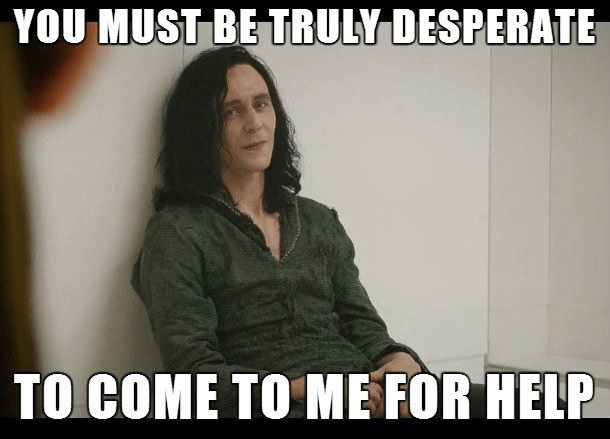 We all know and love Loki.

Witty, wicked smart and charming his way out of any situation with ease.

In a way, us affiliates can relate to Loki.

‘Tis not an easy game this.

You have to be super creative and on top of things 24/7.

You can never let your guard down or kick back in your comfy sofa.

Not until you have your teams in place or enough money to retire for a few lifetimes.

Campaigns don’t last forever and our middle name is “Volatile”.

Affiliate for the past 6-7 years and been through it all - toolbars, eCom, leadgen, through both shady and normal stuff.

But he found it all a bit too volatile for his taste.

By his own words:

“From an “easy money now” mindset we decided to move to a long-term operation. “

This mindset pays off handsomely in the long run.

Pulling in 7 figures a month in a super stable manner, and they’re growing.

“We are generating 7 figures a month for some times now, all white-hat and big % on Facebook.”

What his company does is it allows you, my greedy affiliate, to push viral content stuff and make moolah.

We’re super allergic to manual labor like customer support, infrastructures, employees (for the most part) or having anything to do with your own products.

That’s why we’re masters of every paid traffic source imaginable and we can run circles around “agency marketers”.

The first reply in the thread is one STMer who has already made 6 figures with Hen’s company.

Better check out Hen’s success story thread, gold in there. 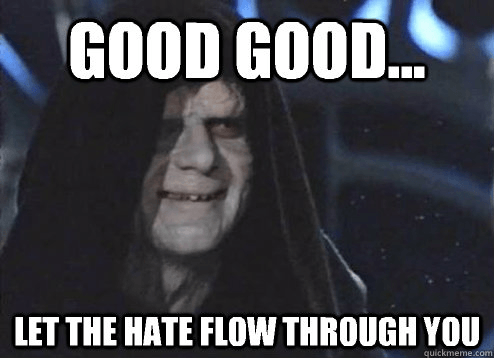 Going to keep this one short because it’s worth reading the entire damn thing.

This guy did SEO for low 4 figures.

He says that you reach #1 on Google, rake in low 4 figure profits and then you’re stuck.

Then he jumped on STM and joined the 6WAMC courses (which aren’t active for the time being).

He tried FB with his whitehat SEO sites - no results.

During the 6WAMC he found tremendous success with some app install offers, more knowledge from his training and sweet angles.

As with everything, all good things must come to an end.

Those app installs died out.

Cue overcrowded call centres not taking in your leads.

But then, he had a lightbulb moment.

“Basically I decided I wanted to build a « moat » around my business, so no-one could easily rip my campaigns.”

Basically pay per call except you get paid per lead.

If that’s not a sweet enough deal he’s getting exclusive offers at each network.

Just for his affiliate needs.

Then he dug an extra moat, thanks to Mr. Tim Burd’s ways and now he’s set for good.

More on that inside the thread.

This is how it’s done ladies and gents 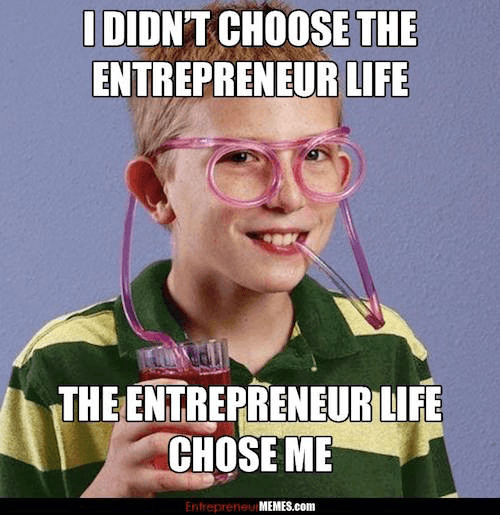 This guy has had quite a journey, but let me just quite the last line from his latest update.

This is not a humblebrag my dear friend.

This is outright showing off.

“And finally, as always, I appreciate all the help and expertise everyone here on STM has given me! It is a privilege to be a part of this wonderful community!”

From a house flipper / real estate investor to SEOer to native traffic.

Native is the keyword here.

“Jack_l” tackled it horns first some time ago.

“I've now been running natives for 3 quarters, and have learned an immense amount. “

As for right now, he posted a m-a-s-s-i-v-e update on what he learned during the last 3 quarters and we all feel super spoiled.

It really is a huge post covering RevContent, Taboola and Outbrain.

You can’t learn this stuff from Google Searches because no one would be crazy enough to share it.

That’s not the case with STM family members. 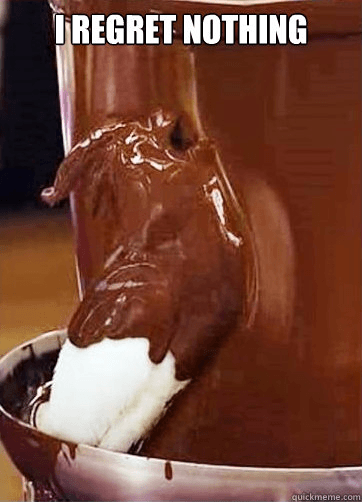 The $1 guide was a massive success and something we plan on continuing in the future.

By far the easiest way to get started in AM.

It’s so simple your lazy cat can do it while lazily chomping on your couch.

Anywhom, one of the prizes from the $1 guide competition was a sub to TheOptimizer.io.

“Anitaway” jumped in on STM and decided to start a mega-detailed thread describing how to use TheOptimizer.

Mind you this is a complete newbie.

The thread itself is like dropping tons of liquid chocolate in your bath tub, diving in and sucking all the chocolate out. 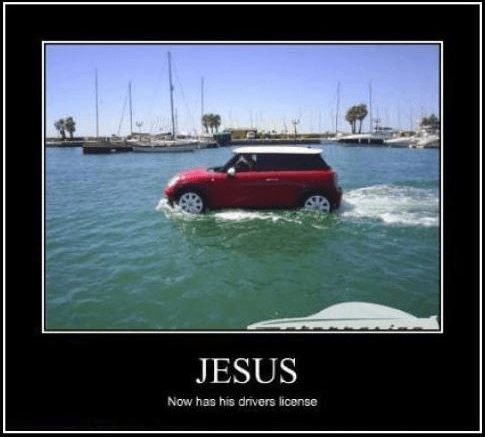 You have heard of him.

The one and only legendary STM mod Matej (@matuloo) has gracefully decided to start a massive guide on how to run adult traffic in 2019.

@spiritwarrior (first post in the thread) is as follows:

“Wow! This is another goldmine. I've been mulling over on how to start with adult. Prayer answered (no pun intended).”

Matej hears all prayers, all the time.

I’ll just quote the start of the thread:

“Oki dokie, so you you’d like to test the waters of our beloved “naughty adult industry”, but don’t know where to start and what the basic setup should look like?

Is your budget low and you don’t want to blow it on tools that are not ABSOLUTELY necessary? No worries, this article is exactly what you are looking for.

As with any business, there are some things you simple do need and there are some that can make your life easier, but they’re not really a must that you couldn’t start without. In most cases, the available budget is the limiting point, but there are also some tools that you can’t really take advantage of as a newbie.”

The rest of the thread speaks for itself.

Gigantic, detailed, well organized and straight to the point. 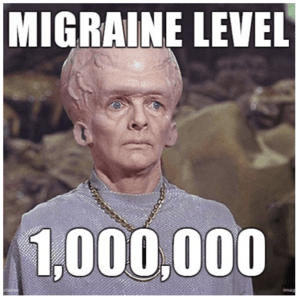 However, he suffered a massive migraine when it came to understanding tracking basics.

Anyone completely brand spanking new to AM struggles with this in the beginning.

It can get a bit confusing but it’s not the end of the world.

What’s funny in this thread is that this guy bites and does not let go until he fully understands every single little detail.

“Now I know some of you guys are casually sipping on your iced half caff ristretto ventis and you're shrugging and wondering what all the fuss is about, but I just feel so much relief since this seems to have sunk in. “

Also this masterpiece he created is a must see: 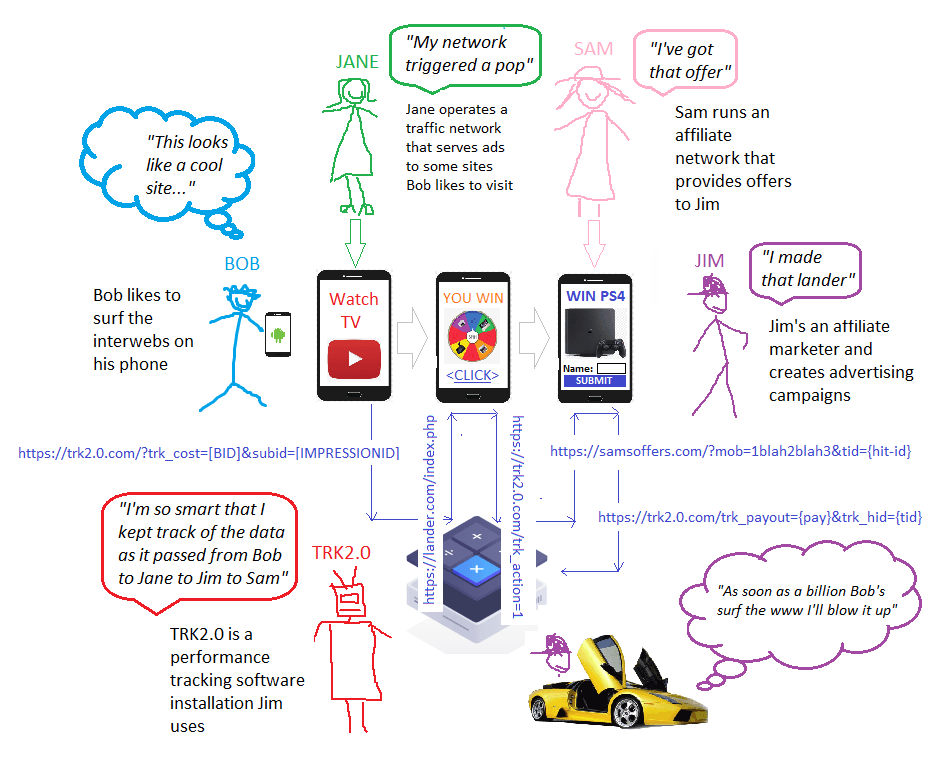 There are details and screenshots.

Until he got it.

And the grand finale:

“I really hope it might help someone in some way if you’re still struggling with this insane URL stuff – even if it just serves to give you confidence that one day, maybe right out of the blue, it WILL all make sense and you’ll finally be able to relax and just get on with it.

Just don't give up struggling. Ever.”

That last line is so crucial in regards to everything in life that you ought to have this on replay in your Spotify at all times.

Until it sinks in.

That light bulb moment is imperative, whether it’s tracking or your first $X,XXX day.

And it is precious. 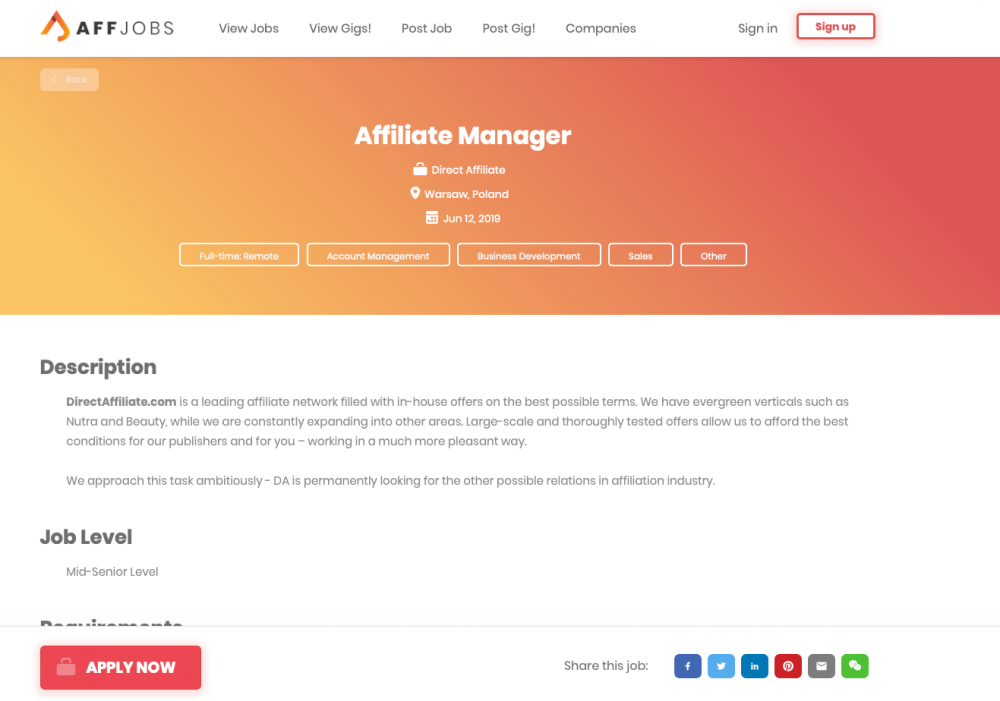 We’ve spoken about this stuff in the past, man.

Getting a job as an affiliate manager can really open your eyes.

It piles up your knowledge so high no one can climb up that hill eventually.

You see the ins and outs of the industry.

A birds eye view if you may.

Plus you get noticed everywhere.

You can attend conferences.

Plus you get paid handsomely.

Anywhom, the affiliate network we’re talking about is DirectAffiliate and they’ve a job post on AffJobs.

“DirectAffiliate.com is a leading affiliate network filled with in-house offers on the best possible terms. We have evergreen verticals such as Nutra and Beauty, while we are constantly expanding into other areas. Large-scale and thoroughly tested offers allow us to afford the best conditions for our publishers and for you – working in a much more pleasant way.

We approach this task ambitiously - DA is permanently looking for the other possible relations in affiliation industry.”

These guys are good and well known around the industry.

The job? Affiliate manager with many, many tasty benefits.

Can also work remotely if that’s your forte.

Or you can work from their offices in Warsaw. (it’s a beautiful city)

Go check it out.